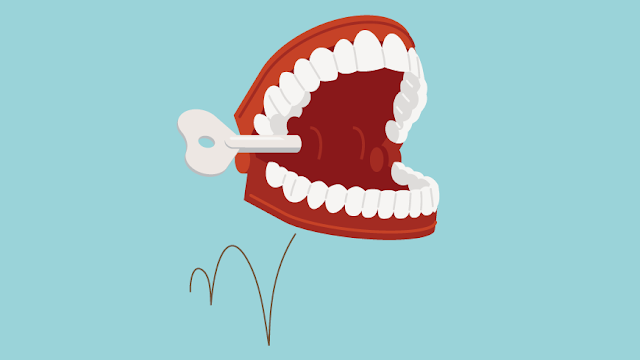 No, not Gnasher, I know that's what you were thinking, isn't it?

That is unless they are darts fans, then they may well think of Dennis "the menace" Priestley he of the "arrers" fame. Interestingly (or not) if you google "arrers" (well I wanted to make sure it was spelt right) the Urban Dictionary, which itself conjures up all sorts of weird and wonderful words/saying, puts "arrers" in a a sentence, in case you are in any doubt what it means. I've just flung my arrers (the UD says), I think it would work better with me arrers, not my arrers (go on, say it in your best Cockernee accent and see which works better) but that's the example they give, my not me.

So why the teeth, or gnashers, as we like to refer to them. I say we, I am not sure who I'm including in that, but I know a lot of people refer to teeth as gnashers.

I have posted about teeth or things related to them previously, how do I know that. Well I have this amazing memory about things I have said many years ago, no, that's not true. Some days I forget what happened the day before, I would have no chance in remembering specifics of what I have posted way back. The reason I know is the label in the post. I wanted to use the label teeth for this one and saw I have used it previously, twice in fact.

Why am I doing a post about teeth, well, they drive me potty (mine) some of the time, now being one of those times. I have several crowns (no, I am not talking regal) and 1 of the in particularly frequently comes loose and drops out, occasionally mid sentence, which can make for interesting interactions, particularly if I am talking to someone that doesn't know me. I often liken it to Conrad Poohs as it isn't just the one tooth. At any given time it could be a range of them, well different ones, sometimes more than one, not sure why they just make me think of dancing teeth. There will be less dancing soon, of the teeth, not me, I don't do dancing, well, I have, but that's another post entirely.

Well maybe not quite that serious, but its a big thing for me and took a while to get my head round.

I doubt very much this will be the last tooth post either and why should it be, at a pound a go (depending on tooth fairy rates) there is a financial benefit to them pooping out, or dancing, as I like to think of them :-)
Posted by Neal at 17:08 No comments:

I didn't that's for sure, not prior to writing this anyway.

It turns out, that Flossy is the name of a Spanish shoe manufacturer's/retailers. I'm loving the camper van greeting on the first page of their website and some of their stuff actually looks ok. I may even buy a Tony in the sale, well 2, one would be no good would it, I probably wont though if I am honest, but for that money, can you go too wrong?

I genuinely do need a basic pair of slip on shoes for "slipping on" (they named them well didn't they) quickly before popping outside . The sort of thing you keep near the back door, for when you need to get the washing in, or put something in/take something out of the garage, or put the bins out, or wipe down your Flamingos because they have become too greasy. Well maybe not the last one, but I am sure most people "pop out" quickly (not in a Micky Flanagan going out way). . .(which to me remains funny however much it is viewed) to do something or other in close proximity of their house.

Assuming you are one of those people who do something or other in close proximity of your house and you don't have some slip ons already, get some, try it, you may find its the best thing you have done, or not, who knows. All I know is I was saying to Mrs R the other day that I need to buy another pair, I threw my last pair in the bin of our old home as we moved out, it was quite a cathartic moment, so I am currently 1 pair short. That's not to say I have other pairs, saying I am 1 pair short makes it sound like I have many and when I last audited I realised a pair had gone, that's not what I mean at all. I just mean that at this moment in time, I don't have any, but would probably like a pair. Maybe stumbling across Flossy's shoe site was an omen, or maybe that's just a book and a film. Believe it or not, my starting point for this post wasn't slip on shoes at all. It was giant Flamingos, well bigish ones, actually 1 to be specific. A Flamingo affectionately nicknamed Flossy, who now (only for now) lives in our porch. I should add that Flossy isn't one of the Flamingos evacuated from the Florida Zoo as the hurricane bore down. She hasn't been "safely evacuated" to our porch from the USA, that would be bonkers, to coin a phrase (another person that makes me chuckle) no, she originated in the UK. I am not sure where she was "made" but we acquired her from Cornwall, following a recent trip, really, don't ask.

Before anyone contacts the society for the prevention of undue weirdness to Flamingos (or its equivalent) I should explain that she isn't real. Well she is in that she is a tangible object, she exists, she isn't imaginary, but she isn't alive. She isn't deceased either, she was never alive, she is made of metal, or tin, or some such material. My slack description of what she is made of is probably a sign I am becoming bored with describing her now, so I will stop.

I am sure I will return with more tales or talk of Flossy at some point in the future, for now though, all you need to know is that she is metal (ish) in the porch and came from Cornwall. Oh and she lights up too, did I forget that bit, yes she lights up, apparently.

As much as its lovely going back to Cornwall, my mother is Cornish and someone very special lives there (my son) I do worry about what comes back with us sometimes, Flossy being a point in question, still she seems to be settling in, in the porch!
Posted by Neal at 19:44 No comments: